In keeping with the momentum already established by the European Institute of Esztergom in its 2014 Cross Border Review, this edition highlights a number of issues related to borders and cross-border cooperation (CBC) that shed light on Europe’s internal contradictions and tensions.  The last two years, but 2015 in particular, were times of hard bordering and re-bordering. Nevertheless, despite geopolitical tensions, cross-border cooperation was maintained by numerous stakeholders at the EU’s external borders. Since the beginning of the new Cohesion Policy programming period in 2014, several assessments of the impacts of EU support for CBC in Central and Eastern Europe point to a mixed picture. The conviction and commitment of local stakeholders, for example in the case of Czech, Hungarian and Polish CBC, remains unbroken, but institutional, structural and often attitudinal hurdles persist in ways that EU policy instruments have not been able to address

One feature in the year’s review is a closer look at the situation of EU-Russian cooperation contexts, which, in the words of Jarosław Jańczak resemble “forgotten borders” at the EU’s external neighbourhood. As cross-border relations between the European Union and post-Soviet states have evolved rapidly during the last two decades with cities, regions, states and civil society opening new avenues of communication with their neighbours. One major conditioning factor underlying this cooperation is the EU’s desire to assume a stabilizing but also transformative role in the Post-Soviet context. The European Neighbourhood Policy represents one of the main instruments of the EU’s ‘Common Foreign and Security Policy’, the principal aim of which is to establish a greater regional context for economic growth and free trade, social modernization, political stability and security. This project, which includes the idea of Eastern Partnership (EaP) with Belarus, Georgia, Moldova, Ukraine and other states,  exists in a nervous tension with the ambitious but troubled EU-Russia partnership. ENP, EaP as well as the EU-Russia “Common Spaces” are informed by discourses of ‘co-development’ and ‘mutual interdependence’ that are part of the ideational and visionary foundations of EU political community. However, with the refugee crisis and EU-Russia tensions it appears that the EU’s relations with its neighbours are increasingly characterized by a ‘hard territoriality’ that privileges security issues, border management and sovereignty. Concerns with undocumented migration, cross-border crime and terrorism as well as continuing visa restrictions on non-EU citizens could reinforce obstacles to co-operation, conjuring fears of an emerging ‘Fortress Europe’ that effectively divides the continent.

EU-Russian CBC is thus a litmus test of the possibilities and limits of local and regional initiative in developing closer cross-border ties across the EU’s external borders. Again, the remarkable ability of local actors to develop coping strategies despite an unfavourable geopolitical backdrop and limited EU resources indicated that the need for CBC is generally understood as more than mere ‘symbolic politics’.  Similarly, political, cultural and cognitive borders are broadly understood to be resources in the organization of everyday social relations. Another clear message that the 2015 Cross-Border Review is the fact that borders have ambivalent impacts. The ambivalent nature of borders stems, among other things, from difficulties in reconciling public life with the private sphere, and a simultaneous need for closure, openness and connectedness.

Despite European visions of open borders, Europe’s boundaries are in many ways markers of inequality, exclusion and, as such, symbols of unfairness. This is not simply a question of socio-economic disparity but one of recognition, acceptance, visibility and engagement. In their original understandings as a development platform, even when not always carried through in concrete implementation, regional and local cross-border cooperation was a political innovation in that it sought to create new communities of interest beyond traditional national orientations. This also involved debunking entrenched stereotypes and resentment between societies by promoting dialogue.

Fairness in cross-border cooperation thus, in our view, requires greater social understanding and engagement and contain elements of concrete development programmes. As part of successful future implementation, for example, it will be important to identify areas of social and cultural cooperation that: 1) resonate with local aspirations and local conceptualisations of policy priorities (e.g. in education, research, entrepreneurship, gender issues, health, linguistic rights, regional development), 2) promote partnerships between civil society organisations, public and private sector actors, the EU as well as other international organisations, 3) enhance everyday (e.g. educational, cultural, economic mobility) within the EU and between the EU and its neighbours and 4) serve the EU’s own primary interests in promoting stability, the rule of law and economic development. In sum, fairness requires resolve on the part of the EU to ‘even out’ a playing field that for historical, economic, geographic and other reasons is not even and will not be for generations to come. Access to the EU and the opportunities it offers should be a major incentive for both the EU and neighbouring states to engage in more substantial and meaningful regional cooperation. 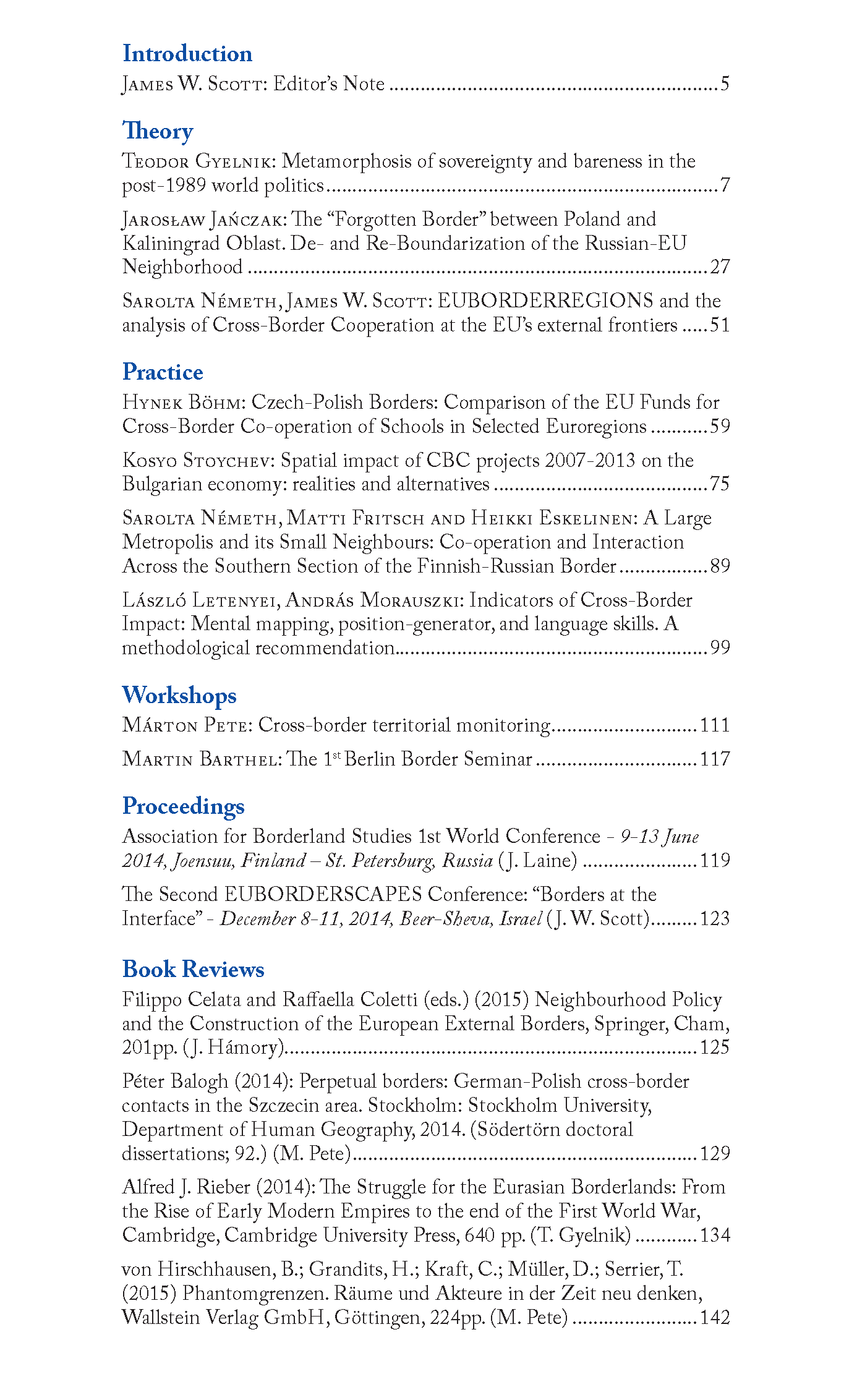 // 2015.01.07.Crossing the borders: best practices of cross-border cooperation within the Danube Region
Closing Conference of the project, Budapest, February 26, 2015